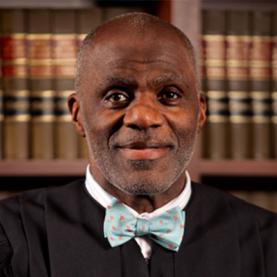 Page reached a peak of performance and prestige in two distinctly different professions. He gained early fame as a defensive lineman for the Minnesota Vikings, where he was a member of the vaunted “Purple People Eaters” and became the first defensive player to win the NFL’s Most Valuable Player Award, in 1971. In 1988 he was inducted into the Pro Football Hall of Fame.

While Page was still playing football he began attending law school, and graduated with his J.D. from the University of Minnesota in 1978. He advanced in law and won a seat on the Minnesota Supreme Court in 1992, where he served for more than 20 years. He served as a U of M Regent from 1989 to 1993. In 2017, the U of M Office for Equity and Diversity awarded him the Polaris Lifetime Achievement Award.

His legacy also includes a powerful impact on Minnesota youth. He and his wife founded the Page Education Foundation, which in 30 years has provided scholarships to more than 7,000 students of color.

On Monday he brought his medal to share in a program at the Minneapolis school that bears his name, Justice Page Middle School.