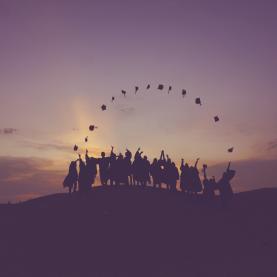 On Tuesday, April 27th, the Graduate School will virtually host Achieve & Uplift, an evening of inspiration for both graduating and continuing Community of Scholars Program (COSP) students. Based in the Graduate School Diversity Office, COSP works towards creating an institutional environment that supports the academic and professional success of Native American graduate students and domestic graduate students of color who are underrepresented in academia.

Time will be spent recognizing the role of mentors who played an integral part in the success of current graduates, and graduates themselves will have the option to give a 2-minute speech offering thanks to their own communities of support, as well as words of wisdom and motivation to COSP Scholars still forging their path in graduate education. 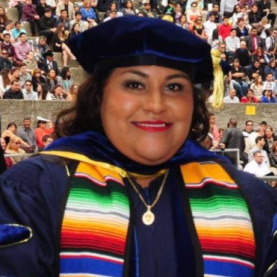 Dr. Gabriela Spears-Rico is a Pirinda-P’urhepecha Indigenous feminist poet and scholar who serves as an Assistant Professor of Chicano Latino Studies and American Indian Studies at the University of Minnesota. Her research explores how representations of indigeneity in Mexican popular culture inform understandings of race and ethnicity among people of Mexican descent. Dr. Spears-Rico is currently working on her first book, Mestizo Melancholia and the Legacy of Conquest in Michoacan, which offers an ethnographic analysis of the Days of the Dead to examine how ‘going native’ functions in Mexico. Centering P’urhepecha critiques of Mexico’s tourism industry, Dr. Spears-Rico’s conceptualization of ‘mestizo melancholia’ explores acts of mestiza/o mourning and appropriation to analyze mestizo-Indigenous power relations and to denude the technologies of mestizaje. She authored “Decolonial P’urhepecha Maternalista Motherwork as Pedagogy,” in The Chicana Motherwork Anthology and “In the Time of War and Hashtags: Rehumanizing Indigeneity in the Digital Landscape” in Indigenous Interfaces, both published in 2019 by the University of Arizona Press.

Dr. Spears-Rico is also a cultural worker and poet. Her poetry has been published in various anthologies including; Sing: Poetry from the Indigenous Americas (University of Arizona Press, 2011), Love Rise Up: poems of social justice, protest, and hope (Benu Press, 2012) and will also be in the forthcoming Critical Latinx Indigeneities anthology. Locally, her creative work has been featured at Intermedia Arts, the Loft Literary Center, the Ordway Theater and the Minneapolis Institute of the Arts. Dr. Spears-Rico is the winner of numerous national awards, including the Mellon Mays Fellowship, the ALCS Fellowship in Native American and Indigenous Studies and the Woodrow Wilson Career Enhancement Fellowship. Within our institution, she was recently awarded a residency with the Institute for Advanced Study and was named a McKnight Land-Grant Professor. Her proudest accomplishment yet is becoming an Indigenous matriarch; she mothers a fierce Ojibwe-Dakota-Chicanita named Miskozi and is a godmother of two and an auntie to 25 nieces and nephews. She lives with her family in Saint Paul.